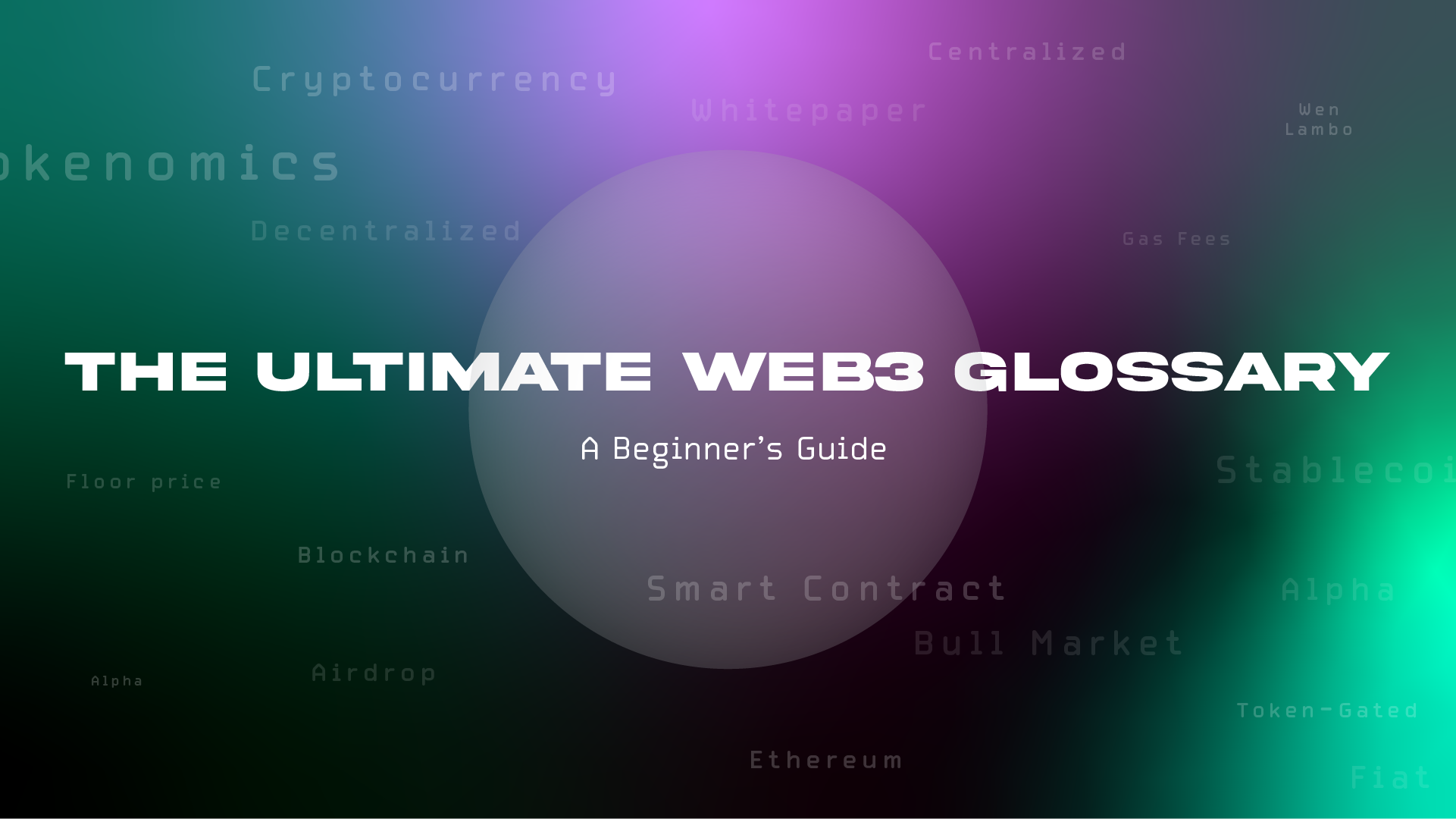 You’ve probably encountered a lot of Web3 jargon but aren’t sure exactly the meaning behind the terms. We’re here to break down the top terms you’ll need to understand in order to maneuver your way around this space.

(noun, verb): a marketing technique in which crypto projects send their native tokens directly to the wallets of their users in an effort to increase awareness and adoption

(noun): valuable or insider information, usually regarding the value of digital assets like cryptocurrencies and NFTs; a measure of the return on an investment over and above the return offered by the market or other benchmark

short for “ask me anything,” is a type of interactive post in which someone answers questions, usually in real time. The AMA concept began on Reddit, but AMAs are now popping up in other social settings, like webinars, Facebook Live, or Instagram Stories. AMAs were originally text-based, but it can also be effective to answer questions using live social video or interactive stickers

(noun): a mechanism which explicitly allows some identified entities to access a particular privilege, service, mobility, or recognition. Sometimes known as a whitelist

(noun): a prolonged period of decline in a financial market

(noun): a batch of transactions written to the blockchain. Every block contains information about the previous block, thus, chaining them together

(noun): a publicly-accessible digital ledger used to store and transfer information without the need for a central authority. Blockchains are the core technology on which cryptocurrency protocols like Bitcoin and Ethereum are built

(noun): a period where market prices are rising

(verb): the process of removing tokens from a cryptocurrency’s circulating supply, usually done by sending them to an inaccessible wallet address. Other digital assets, such as NFTs, can also be burned via the same process

(adjective): a hierarchical structure in which authority and control are concentrated within a small group of decision makers

(noun): a digital asset designed to be used as a medium of exchange. Cryptocurrencies are borderless, secure, and maintained by blockchains as opposed to centralized banks or governments

(noun): an organization based on open-source code and governed by its users. DAOs typically focus on a specific project or mission and trade the traditional hierarchical systems of legacy corporations for guidelines written on the blockchain

(noun): an application built on open-source code that lives on the blockchain. Dapps exist independent of centralized groups or figures and often incentivize users to maintain them through rewarded tokens

(adjective): a system that operates without the control of a central figure or authority, and replaces it with a distributed peer-to-peer network

(noun, adjective): initially short for “degenerate gambler.” While this still refers to individuals involved with risky bets, degen may also refer more broadly to anyone involved in crypto and financial spaces. Like with “ape,” this is generally a self-assigned term and does not carry a negative connotation

(noun): the ecosystem of borderless, trustless, peer-to-peer financial tools being built on public blockchains without the use of banks. DeFi apps are built to be open and interconnected, allowing them to be used in conjunction with one another

(noun): a public blockchain serving as the foundation for decentralized applications. Ethereum is a turing complete language, allowing for users to write and deploy complex, self-executing smart contracts which live on the blockchain

(noun): a currency established as legal tender, often backed and regulated by a government, such as the US Dollar

FOMO - Fear Of Missing Out

(noun): a feeling of anxiety, stemming from missing out on an opportunity. In investing, this usually coincides with investors buying an asset after it has already seen a considerable increase in price, hoping to get in and out before a pullback occurs

the lowest price for NFT collection items, rather than the average item price, and is updated in real-time

(noun): a fee paid by a user to conduct a transaction or execute a smart contract on the Ethereum blockchain. This fee is dependent upon the transaction’s complexity as well as the current demand on the network

short for “gonna make it.” This term is frequently thrown around on Twitter to voice support for a project or person.See also: NGMI (antonym)

(noun, verb): a scam maneuver where a crypto project takes the funds that have been invested into its protocol and runs. An inside job pump-and-dump, if you will. A rug pull can also occur in assets with highly centralized ownership. If someone is able to sell a large portion of the circulating supply at once, this rapidly increases the supply, which can cause the price of the asset to plummet

(noun): Self-executing code deployed on a blockchain. Smart contracts allow transactions to be made, and provenance to be preserved, without an intermediary figure and without the parties involved having to trust one another

(noun): unlike a coin, a token is a digital asset created on an existing blockchain. Tokens can be used to represent digital and physical assets, or used to interact with dapps

(noun): a combination of "token" and "economics," is a term that refers to the overall economics of a specific crypto token. It’s the topic of understanding the supply and demand characteristics of cryptocurrencies

A machine that, given enough time and memory along with the necessary instructions, can solve any computational problem

Stands for "We're All Gonna Make It," a common saying in crypto and trading circles signaling camaraderie and a positive outlook

(noun): Also known as a public key, this is an alphanumeric code that serves as the address for a blockchain wallet, similar to a bank account number. Other users can send digital assets to your wallet via your public key, but only you can access your wallet’s contents by using the corresponding private key

(noun, adjective): The next iteration of the web being ushered in as we speak, which leverages blockchain technology, open-source applications, and the decentralization of data and information. Web3 aims to remove control of the web from monopolistic tech companies, and return ownership of data and content to its users. Also referred to as the “read-write-trust web.”

(adjective): A phrase referring to when cryptocurrency holders will become rich enough to afford the purchase of a Lamborghini

(noun): is a mechanism which explicitly allows some identified entities to access a particular privilege, service, mobility, or recognition

(noun): a report or guide that informs readers concisely about a complex issue and presents the issuing body's philosophy on the matter. It is meant to help readers understand an issue, solve a problem, or make a decision